Honestly, though…this isn’t really a story about food, but I thoroughly enjoy this quote.  And Virginia Wolf.  And food.

We are kitchen people.  Aside from the fact that we love all things food (yeah, I know you know), we LOVE to be in the kitchen.  Yes, most of what we do there does revolve around some sort of food or drink, but the truth is, it’s where we choose to be no matter what.  We not only cook and eat in the kitchen, we socialize in the kitchen.  We entertain in the kitchen.  Create in the kitchen.  Gossip in the kitchen.  Read in the kitchen.  Lounge in the kitchen.  It is, truly, the heart of our home — our core, our nucleus, our kernel.  Even in our old homes (leaving an entire house full of furniture and large, empty rooms!) we’d end up lying around on the floor or leaning against counters in oddly shaped, poorly laid out, tiny kitchens with never enough seating or surface area.

When we moved in May (to the ranch, as I like to call it), we knew we were acquiring a beautiful kitchen (I was GIDDY with excitement — I’ve never shared quarters with a perfect kitchen and the thought blinded me with joy).  Months before the move, I was on the hunt for the perfect island.  I knew what I wanted — rustic and industrial — but I wasn’t sure where to find it.  I wanted something custom, something out of the ordinary, something WE designed (not your run-o-the-mill piece from Restoration Hardware or West Elm or what have you).  We stalked Pacific Galleries, and Haystack, and Second Use, and such as and so forth.  We combed through craigslist ad after craigslist ad.  I saw a handful of things that I almost fell for (I need things…lots of things…all things), but my voice of reason (also known as Cheryl Baker) kept me grounded and loyal to our original idea of what we wanted in said island.

In late February, amidst a serious absence of garage sale ads on craigslist, we found a unique sale out in deep Issaquah — a cool sign company that was clearing out something or other — an acre’s worth of crap.  They had great pictures of old industrial signs and materials and everything that made my heart skip a little beat.  Two cars full of us made the trek — one pulling an empty trailer (JUST in case).

We landed on a large property in the middle of nowhere with every inch of it covered in some sort of industrial piece or part.  Old, neon signs and plexiglass and metal letters littered the grass.  Machinery with purposes beyond my comprehension stood tall and brawny, some looking quite kingly with their sizable, steel protrusions glistening in the sun flecks.  It was early, and although there was a bit of gold poking through the trees, it was wet and cold — everything matte with dew.  They had a LOT of cool stuff, no doubt.  But most of what I wanted was just that — stuff that I wanted.  The prices were high and while I could have left with a trailer full of things I didn’t NEED (and a seriously desolate bank account), I was after an island, and an island I had not found.

I was just about to retreat to the truck when four rusty legs on casters only slightly smaller than my head were illuminated by a splash of sunlight.  I started uncovering this monstrosity of a structure…rearranging human-height steel beams and grates, old mechanical parts and tools, getting more and more anxious to see if these sexy legs led to anything spectacular…

After making quite a spectacle of myself (I dropped a couple of heavy pieces, the result a clamor impossible to ignore), I uncovered the most MARVELOUS specimen of steel.  I was instantly in lust.  There before me stood the PERFECT kitchen island.  Originally starring as: a welding table, heavier than God, dirtier than a sailor’s mouth, more beautiful than the sky.  If it would have been acceptable to kiss its feet, I would have.  Instead I gave it a pathetic once over and made a mad dash to the old stiff that was selling all this crap.  We went back and forth on the price.  We started at something ridiculous (in the most conclusive of voices: “you know, I have a guy that’ll pay over a grand for pieces like this”), and ended at a number just above 3 digits (I can’t sell, but I sure as hell can buy!).  A quick handshake sealed the deal, and off we went with visions of sugarplum fairies dancing in my head.

The idea was simple.  Sand off the paint bits, leave the rust, clean up the casters, seal the metal, and affix a wildly talented, step-dad original to the top (this consisted of a beautifully constructed wood slab with custom details and a natural oil finish).

The island in place (topless)

Well, a handful of months later, our island arrived.  Complete and glorious and deserving of endless praise (and apparently a story of its birth)!  Needless to say, it has completed our little nerve center and will continue to make our happy place that much happier.  Long live the ranch! 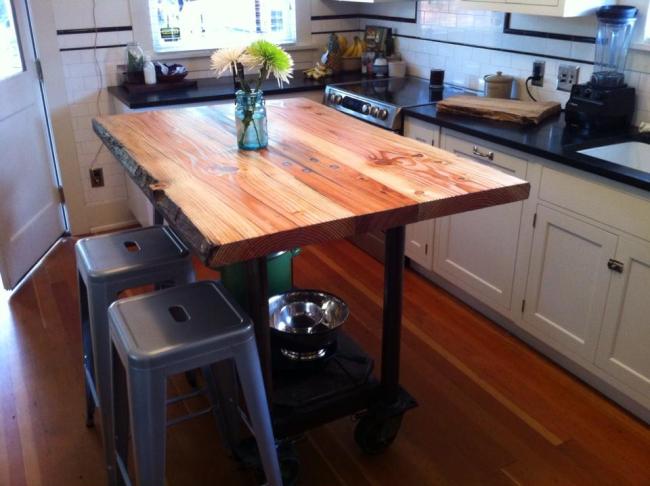